As with other needs, a veteran will require furnishings and household items for their new residence when they leave a shelter or transitional housing.

How does furnishings and home items get to a veteran?

AFIL works alongside local agencies who are housing veterans. These agencies confirm veteran status and their needs, then refer them to AFIL for our services. AFIL will then deal directly with the veteran to determine items needed and schedule to deliver these goods.

AFIL and our partner agencies are providing safe, clean living spaces to veterans experiencing homelessness, however, the units are typically unfurnished, leaving these veterans to sleep on the floor, no means to cook, sit, or enjoy the basic comforts of a furnished home. It is this gap we are closing with the support of donated furniture and household items within the community.

Imagine being homeless and then be given an opportunity to get into housing, only to realize that although you have a roof and walls, you still don’t have the basic dignity of a bed or a sofa or even some dishes. Furniture for Veterans was established to fill this void. Since the start of this program, AFIL has provided and delivered over $320,000 in donated furniture and items to veterans who were previously experiencing homelessness. 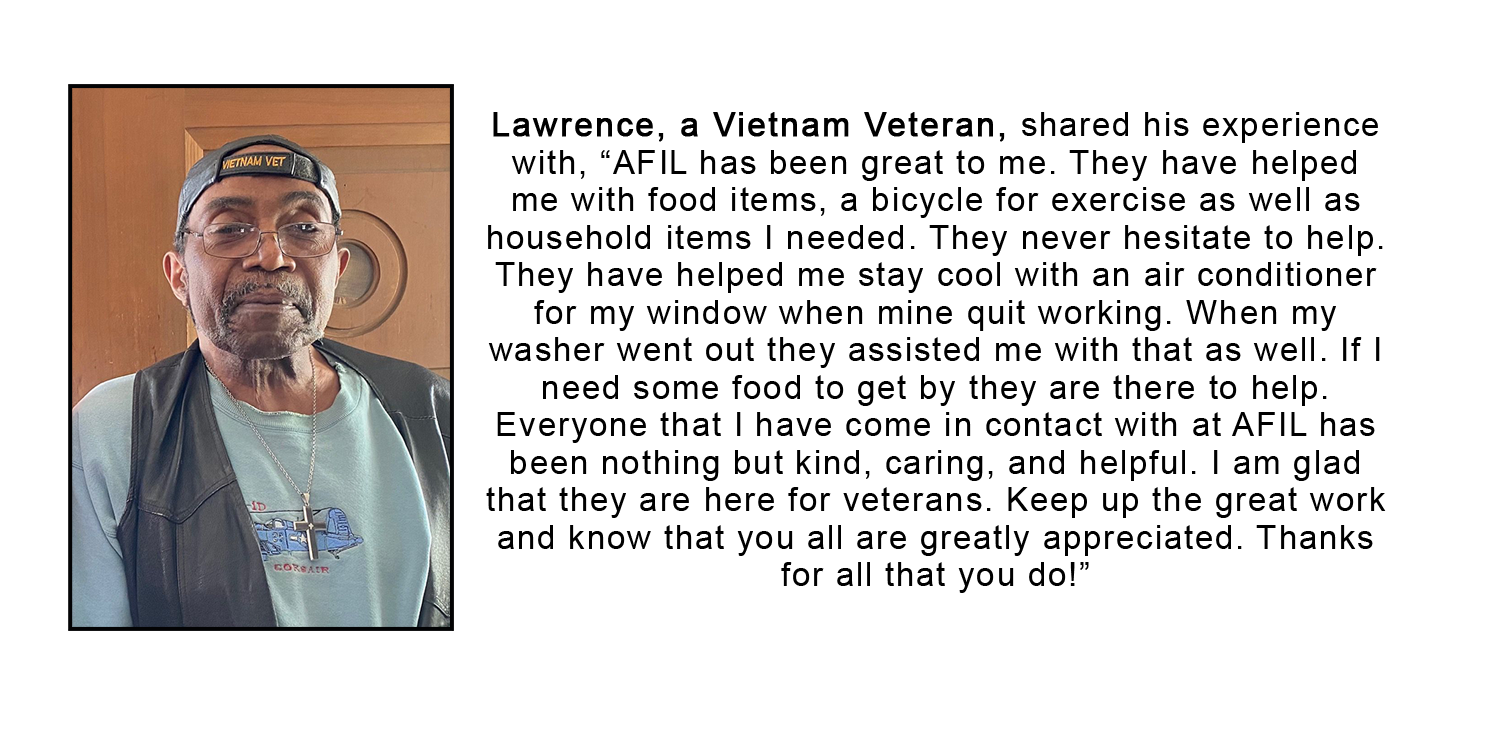 Michael, a Navy Veteran who recently got into an apartment from being homeless  was brought furniture and household items from AFIL. When asked how these items will make a difference to him he said, “I am not too proud to ask for help now. I was homeless for 2 years and having a home and stuff to go in is an incredible feeling.” Michael was also given a power wheelchair to assist him to get to the grocery store from where he lives. He has had multiple knee surgeries from a service-connected disability and it makes it difficult to walk distances. When he was given the chair he said, “(shaking his head) you don’t even know. This will be a huge help for me. Thank you to whomever donated it to you as it will be a lifesaver for me.”
“My Dad was a vet and he would be so happy to know other vets can use his stuff”, stated John from Vinton after donating items to AFIL.
After donating a power wheelchair, “My father-in-law was a vet and he would be so tickled if another vet could use this chair.”
Gloria from Cedar Falls donated quilts and hats she made and stated, “It is my honor to donate something to a veteran.”
Marine Veteran Ed commented about the furniture and household items brought to him by AFIL, “I don’t know why anyone would help me out, but you guys are-thank you so much.”
Marv from Traer said this after donating furniture to AFIL, “I am a vet and we look out for each other.”
Mary donated men’s clothes to AFIL and said, “I have 4 uncles who were veterans and I wanted to help other veterans.”
Cheryl from Waterloo who donated many household items to AFIL said, “My heart goes out to both veterans and anyone experiencing homelessness so when I saw a Facebook comment about AFIL I knew I had to give.”
Shirley from Waterloo whose husband was a veteran said, “My husband would be so happy to know these items are going to another veteran”.
Donna donated men’s clothes to AFIL and said it was because her husband was a vet and has since passed away. They received help from others during his illness and she wanted to help other veterans so they would not have to pay for items.
Clint, Army Veteran from Waterloo was recently assisted with housing. Once AFIL delivered items to his home, he had this to say, “I just don’t know why you are helping me. I really appreciate it and man, this stuff is nice. When I was told there was a place who’d help with some things I had no idea it was with all of this stuff. There is a couch, table and chairs, kitchen stuff, things for the bathroom, curtains, and so much more. Thank you for helping me, you don’t know what this means to me.”

Veterans and families assisted by AFIL since 2017. 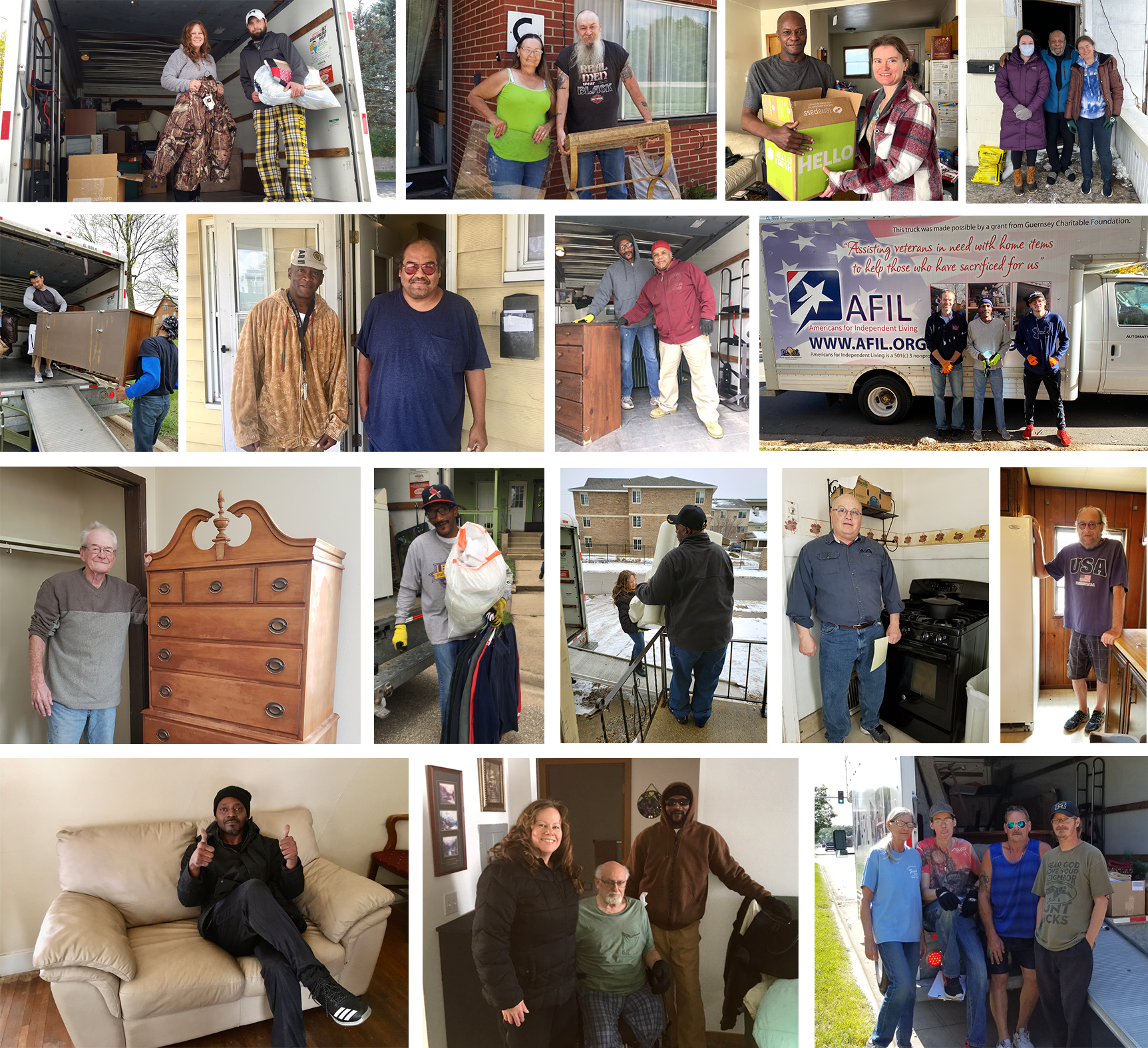